Thursday, 30 September 2021 5:27 PM- Beloved Northern Lights, beware: this great phenomenon may illuminate the Quebec sky over the next two nights, even in the southern part of the province.

Northern lights are born out of the connection between the particles produced by the solar wind and the Earth’s upper atmosphere. Because poles act like a magnet and attract these atoms, they are usually much easier to observe near them.

Although they are easy to observe beyond the 65th parallel, certain conditions may allow them to be seen at lower latitudes. However, the solar flares must be stronger, allowing this view to penetrate the skies of more southern regions.

This is likely to happen over the next two nights: a very important solar event should allow Quebec to see the northern lights. In southern Quebec, even to the larger metropolitan area, it can be seen – it is relatively rare.

The next two evenings will be favorable for northern lights. Chances are, the night will be between October 1 and 2: this is when solar activity peaks. K index used by NOAA to describe the intensity of electromagnetic activity in the atmosphere, Would actually be very high – about 5. 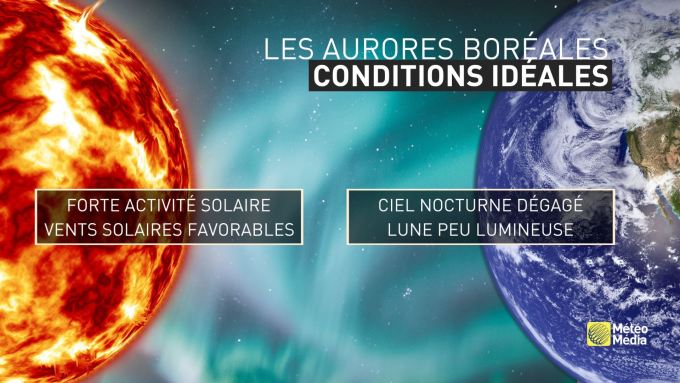 The best times are from 10pm to 3am, avoiding light pollution.

The different colors that the aurora produces can be explained by the structure of the solar wind. So oxygen will give green and red colors, while nitrogen will give blue, red and purple colors to the sky.

This will not be the end: October is the best month to observe this great phenomenon as January and February.

See also: We often do not see such rosy auroras!