The first half attempts by Billy Burns and Hugo Keenan led to the campaign’s second victory, which secures a play – off match against Scotland next Saturday.

However, it was far from plain sailing, and Georgia, ranked 12th in the world, created enough problems to ensure the hosts had plenty to work on ahead of next week’s match.

On a beautifully clear day for rugby in Dublin, Ireland conceded 10 penalties, turned 12 and picked up several bad options.

In the end Georgia did not have the quality to make gains but it will be reduced to another bad day in the office of head coach Andy Farrell.

Ireland made nine changes to the team that lost to England last weekend, bringing in Jacob Stokedale, Stuart McCloskey, Burns and Conor Murray to the backline, while Finley Bealham, Rob Herring, Ian Henderson and Thaddeus Bourne were added.

Ireland dominated the opening 15 minutes, the full value of their 10-0 win.

Despite two errors in handling and treading, when Burns made his first start after taking a soft pass from Chris Farrell, Ireland took a well-deserved lead.

Ulster converted the out-half, and Georgia added a penalty before possessing anything in the Irish half, and everything went according to Andy Farrell’s script, except he conceded a penalty in a scrum.

Georgia, who have not lost to England and Wales in the opening Group A, hit back in the 17th minute when full-back Soso Matiashvili center player Georgi Quezeladze played a pass halfway.

Beer, Andrew Porter, Stockdale, Dummy take full back and leave the center, ignoring Burns, speed enough to reach the top of the line under the posts.

Tedo converted Absandro, and Georgia was also in the game.

Burns added a direct penalty in the 23rd minute when Georgia failed to release the ball carrier.

Attempts were rejected when Rob Herring and Stuart McCloskey were seen crossing the border legally into Ireland.

McCloskey, who won his first cap in two years, was unlucky enough to have his long-distance effort rejected for a build-up forward pass. 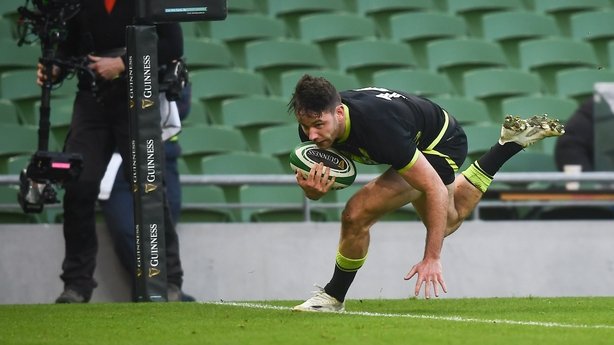 Burns converted to give Ireland a 20-7 lead, but were disappointed halfway through, unable to change a period of pressure and denying Georgia a commitment.

Things didn’t get any better than the resumption, with Chris Farrell catching the tackle and allowing Absalom to kick from the penalty spot three points.

Shortly before that, Burns appeared to have a lumbar injury, with Ross Byrne coming on as a substitute and John Ryan Porter as Ireland’s second midfielder.

Eleven Myasashvili’s team was certainly the team’s most vocal, logically, holding on to several penalties against Chris Farrell during the scrum, giving them confidence that the cards were in disarray.

That momentum stopped when Bain took his first day’s kick to give Ireland a buffer in the 58th minute, but there was no liquidity in their game.

Georgia lost a serious looking leg injury number 8 in the 63rd minute when Becca Gorgadze began to separate the game with the arrival of a raft instead, including a debut by Munster Shane Daly.

See also  "I pay attention to everything unexpected"

The sequel continues to be a source of pain for Ireland, while two unintentional kicks did not help.

If there was a crowd, it would start a Mexican wave.

Try as they try to add a third attempt, Georgia stretches, it is a performance that will raise as many questions as the answers for Ireland.