“Willie John McBride” by ulsterrugby.com is licensed under CC BY 3.0

Willie John McBride is a living legend of rugby union. Between 1962-75, McBride, 80, played 63 test matches for Ireland, including 11 as captain. He toured five times with the Lions in 1962, 1966, 1968, 1971 and 1974, serving as captain on the final of those five tours when the Lions visited South Africa. Most in rugby consider him to be the greatest of all the Lions. McBride also managed the Lions side that toured New Zealand in 1983.

The Lions are slated to again tour South Africa this summer and while these international matches will undoubtedly prove to be popular with all of the best online sports betting sites, McBride isn’t at all sold on the idea. He believes that the objectives of and plans for this tour are tarnishing everything that the Lions have stood for over the years.

A member of the Most Excellent Order of the British Empire, a British order of chivalry, McBride sees nothing at all chivalrous about what the Lions are setting out to achieve this summer. He’s of the belief that the tour should have been postponed and that the fact that it is going ahead tarnishes the image and tradition that the Lions have built through decades of international play.

“It’s a nonsense, a total nonsense,” McBride told the Rugby Paper. “It should have been postponed. The concept of the Lions has been destroyed. It’s now purely about money.”

What’s A Tour Without Spectators?

One of McBride’s main issues with the upcoming Lions tour is that the matches will be contested in empty stadiums. Spectators will be banned due to health and safety measures required to combat the COVID-19 pandemic.

“What sort of tour is it when there won’t be any fans?” McBride asked. “Let’s be honest, this is a non-tour.”

He believes that the tour organizers have money signs in their eyes that are blinding them from the fact that they are ignoring what the Lions represent in the process.

“A Lions tour has always been about more than playing matches,” McBride said. “There’s no other sport I know which brings the best players of four countries together to play overseas. We used to take the game to every corner of the country we were visiting. That’s all gone and I find it absolutely dreadful for the game I love.”

McBride insists that this tour is all about cashing in and not about the rugby that will be played.

“If there’s a few bob to be made in some stupid game, they go ahead and arrange one,” McBride said.

The COVID-19 pandemic is impacting the Lions tour in other facets as well. The tour will consist of just eight matches. In order to keep the Lions situated in a COVID-19 free bubble, all matches will be played in Johannesburg and Cape Town only. Those eight matches will include a three-test series against the reigning Rugby World Cup champion Springboks.

The tour schedule was revised and now excludes the cities of Durban, Port Elizabeth and Nelspruit from hosting provincial matches as was originally planned. 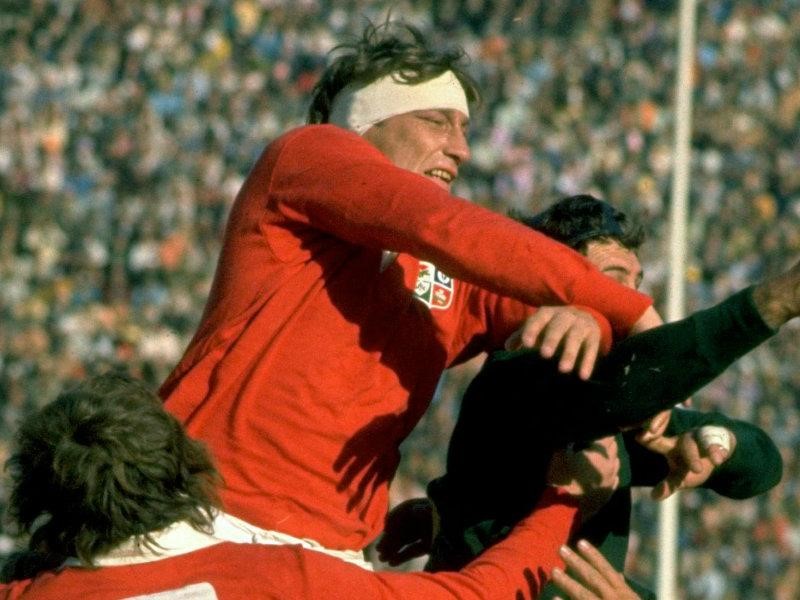 “Willie John McBride” by Allsport UK/Allsport is licensed under CC BY 3.0

The former Lions and Ireland second-row forward also has a bee in his bonnet over the decision to have the Lions play a home match prior to departing on their tour. The Lions will meet 2019 Rugby World Cup quarterfinalist Japan in a test match at Murrayfield in Edinburgh, Scotland on June 26th. The Scottish Rugby Union and the Scottish government have reached agreement to permit 16,500 spectators to attend the match.

The last home match for the Lions was played against Argentina in Cardiff in 2005.

McBride is of the opinion that a touring side shouldn’t be playing home matches.

“The Lions should never play at home and yet they’re playing this game against Japan in Edinburgh,” McBride said. “It’s about making money.”

When McBride captained the Lions on their 1974 tour of South Africa, it was a true tour. They traversed the country and played 22 matches in all areas of South Africa.

The Lions won 21 consecutive games, including the first three tests with the Springboks. The fourth test, the final match of the tour in Johannesburg, finished in a 13-13 draw.

Oddly, the 2021 Lions, are also to be captained by another veteran lock who is known for his two distinctive given names, Alun Wyn Jones of Wales.

Written By
Josh Atkinson
More from Josh Atkinson
WhatsApp Has been working on a series of updates in recent months...
Read More