U.S. President Donald Trump has arrived in California to explain the spread of wildfires along the country’s west coast, telling officials that global warming will reverse itself.

Trump’s visit to California for the first time since a three – day re-election campaign began with abrupt stops and devastating flames.

Trump arrived at McLellan Park near Sacramento, Central California, due to the increasing risk of wildfires in places like California, Oregon, and Washington due to inadequate forest management.

He also said that strong forest management is needed.

“For forests, when the trees fall down after a short period of about 18 months, they become very dry. They really look like a match stick,” he said. “They explode.”

Trump visits California Governor Gavin Newsome It was strongly argued that global warming was the cause of the fire.

Despite pointing out that more than half of California’s land is under federal control and not state control, Newsom acknowledges that “we have not done justice to our forestry.”

But he said the excessive cause of the problem was too big.

“The hotter the heat, the drier the dryer,” he said.

“We submit that science exists and the evidence observed is self-evident: that climate change is real and that it makes it worse.”

Trump later commented that global warming would reverse itself, saying the weather would “begin to cool”.

He put aside his worries about climate change: “It’s starting to get cold, you pay attention.”

Wade Crawfoot, head of the California Natural Resources Agency, responded: “I want science to agree with you.”

President Trump: “It’s starting to get cold, you see.”

Croft: “I want science to agree with you.”

Biden had earlier accused his presidential opponent of being a “climate firefighter” for refusing to take global warming seriously if the Republican candidate is re-elected in November.

“If you give the White House a four-year climate firefight, why would anyone be surprised if we burned more America?” Biden said he was saving Trump for failing to take responsibility for the current wildfire crisis. 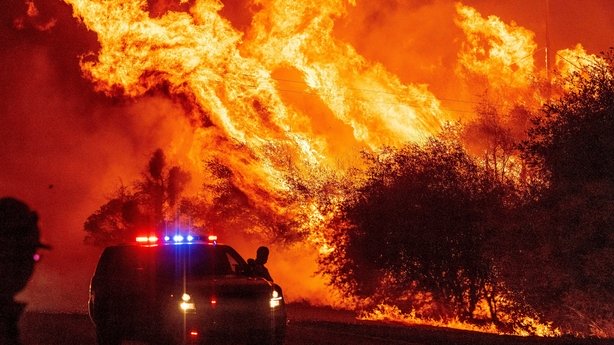 We need a president who respects science, who understands that the damage from climate change is already here.

“We are committed to doing this together, because we know that climate change is an existential challenge that will determine our future as a nation.

“Or we can do it the way Donald Trump did: ignore the facts, deny the reality, which is tantamount to complete surrender and failure to lead.”