If you’re looking to escape the stress of Dublin, the small coastal town of Skerries in County Fingal, 30km north of Dublin, can provide the tranquility you need to recharge your batteries. A former fishing village, Skerries offers many attractions to the curious visitor.

Beautiful beaches and a colony of mischievous gray seals

The small harbor of Skerries with its colorful houses is located at the end of two large sandy beaches that make for a lovely walk. It offers great views of the many small islands that dot Dublin’s north coast and the Morne Mountains in the distance. The harbor is also a great place to visit the famous gray seal colony of Skerries. You only have to look out to sea for a while to see their gray heads tossed by the waves, always ready to catch fish when the fishermen return. After this show, a stop at one of the many pubs is a must, with a special mention of the casual atmosphere of “Stoop Your Head” and its seafood dishes.

If you have time, take the scenic coastal road to Bolbriggan and turn left towards Ardgillan Castle. In spring, the park’s path is lined with centuries-old trees, covered with daffodils, snowdrops and other buttercups. A large 18th-century lawn, located between the sky and the sea, the Rose Garden allows you to discover many fragrant varieties of roses and other flowers in summer. Tree-lined paths lead down to the sea via the “lady’s stairs”, where the ghost of a lady from the manor sometimes appears.

Old mills, romantic ruins and a small harbor to discover

Then, return to the village through the many small shady alleys winding towards the sea, where a romantic ruin from the Middle Ages or another era may appear at the bend in the path. You can also visit the silhouettes of the mills of the 17th century skerries. Laushkinney Harbor on the coast between Skerries and Rush The Skerries coast offers another pleasant surprise, delighting you with the false air of a small Breton harbor and fine sand well protected from the waves. Scarries and its surroundings are a real change of scenery just a few kilometers from the Irish capital. 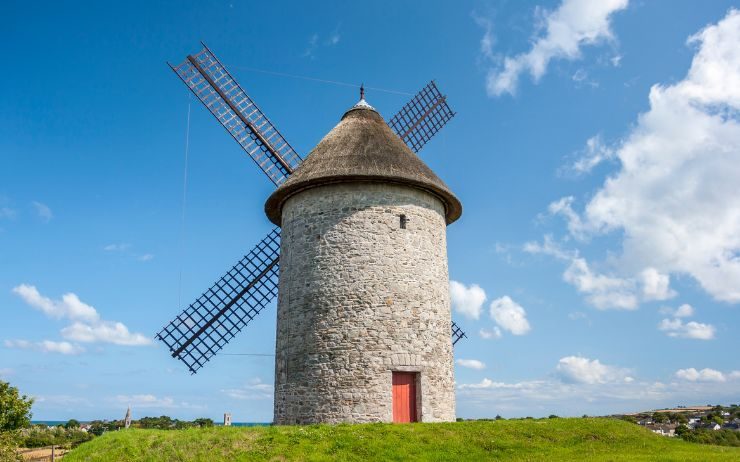 To get there:
Pick up from Dublin M1 Motorway Skerries to R127 via Lusk.
A the train Between the Dublin and Balbriggan/Drogheda line there is a stop at Skerries
The the bus The No. 33 departs from central Dublin via Walls, Lusk and Rush with several stops at Skerries.