Excavations by the Istanbul Museum of Archeology at the Besiktas metro station have uncovered Kurgan-type tombs dating to 3500-3000 BC.

Istanbul Archaeological Museums have been conducting archaeological excavations since 2016, and will be the Besikta station on the Cabata-Besikta-Mesidieke-Mahmudbe metro line in Istanbul.

To protect the area from weather events that could interfere with mining, a giant pier was built and a canvas placed on it. In addition to the remains of tram lines and depots built in 1910, remains of the Ottoman period and later the Middle and Late Byzantine periods were discovered during the study.

Soon after this layer, small discoveries from the Hellenistic and Roman eras were discovered, which are very important for the Phosphorus Line. However, during the excavations at Besikta, archaeologists encountered the most exciting finds after these layers. At a depth of one and a half meters above today’s sea level we saw rows of stones with a circular plan.

As studies progressed, it was revealed that these structures were tombs of the Kurgan type. All the oldest Kurgan tombs found in Turkey were cremated and the bones were broken.

For this reason, archaeologists in the field continue to use dental instruments. All the tombs are opened and recorded after a very careful study.

Paulette described their findings in excavations since 2016:

The place where we dig is the Besikta station area. In 2016, we started operating here as Istanbul Archaeological Museums. You know this place is in Besikta Square. In the works started from the square level, after filling up to 2 m from the existing surface, we came to the remains of the tram line and the depots built in 1910. After the removal of these debris as per the decision of the Conservation Board, the work continued.

Paulette continued his speech with the following statements:

Next, we see the findings of the Byzantine period, which include the Ottoman, then the Middle and late Byzantine periods. Immediately after this layer, the most important classical period for the Phosphorus Line is our BC. We saw small discoveries from the Classical, Hellenistic, and Roman periods called the 6th century. These were inevitable as they were the first excavations in the area.

But just below the completion of this classical period, Besikta’s main thing is that there are rows of stones that give a circular plan one and a half meters below today’s sea level. As the excavations progressed, it was revealed that the circular stones here were tombs of the Kurgan type. Circa B.C. 3500, i.e., belongs to the eras we call the first bronze in chronology. We saw about 82 tombs inside and outside the kurgans, in a row of stones giving a circular plan. Of these 82 tombs, 75 are for burial, with the skeletons cremated and buried. 7 of them were direct cemeteries, which we call renovations.

Paulette stated that they found different types of cemeteries in these early Bronze Age kurgans. “The skeletons buried in the cemetery look like very broken bones. Some of the kurgans have graves, which are burned directly on the spot and left there, while some of the graves are cremated in other places and brought in terracotta pots and buried here.” Said.

Pollat, “In these tombs, along with the skeletons, we found serious gifts. Most of them were terracotta pots. We found very few tools called arsenic copper. He spoke in form.

Paulette went on to say that the tombs here are of great importance because they are the oldest Kurgan type tombs found in Turkey:

These belong to the early Bronze Age. Here, two terracotta statues were found in a tomb. They touched each other in the tomb, a large and a small one, at the tip of their feet. The significance of these is that we have not found similar statues to date.

Pollat, “The statues had some symbols. When we did some research we found that they were Ranic alphabet symbols. Symbols found in the Vinca culture on the Romanian side.” Said. 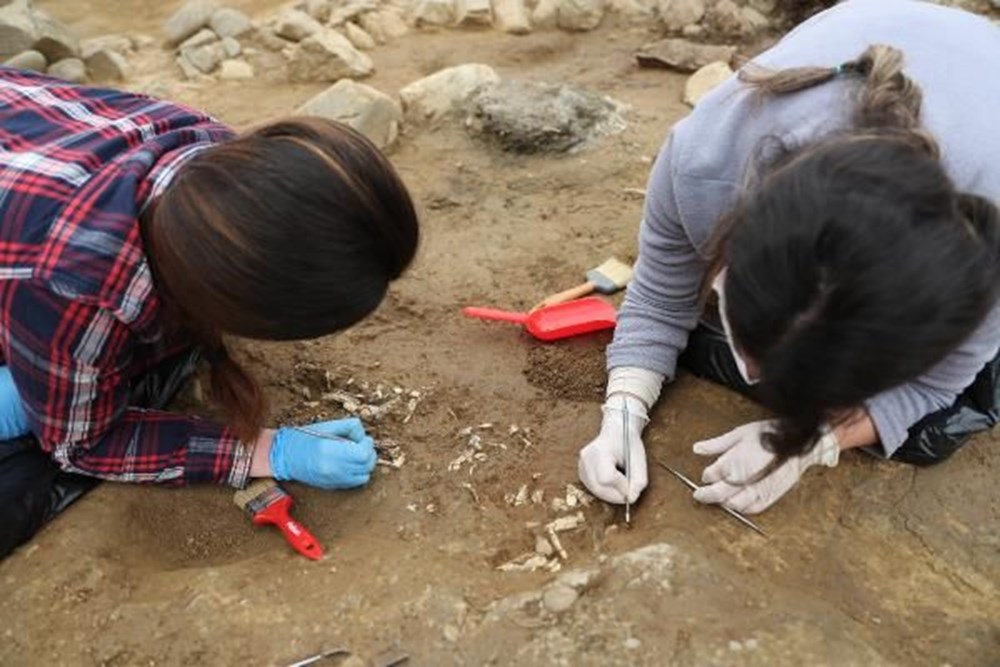 “Thanks to the tombs, the data will change the world’s immigration map, so it’s very important,” he said. “Looking at the world immigration map, you can see people migrating from the Balkans north of the Black Sea to Anatolia during the Bronze Age,” said Paulette. But when you look at the latest data here, tombs, small finds and runic alphabet symbols are being evaluated, which could turn the migration map into pods and from there to northeastern Europe and the Black Sea. “ Phrases used.

It will be displayed above Besikta station

Paulet said the fate of what was found here would be “the work you see behind it is the second part of this subway station.

Written By
Jake Pearson
More from Jake Pearson
According to new research, the cosmic body is different compared to other...
Read More