Davos: On the second day of the World Economic Forum conference in Davos, Switzerland, AP Chief Minister Jagan meets with a number of dignitaries. In the second morning session, he attended a conference on Future Proofing Health Systems, after which he met with Dassault Systems Executive Vice President Florence Vergalen and Tech Mahindra CEO CP Gurnani. These meetings focused mainly on human resource development and skills development.

IT hub for Visakhapatnam
The Chief Minister met Tech Mahindra CEO and MD CP Gurnani at the AP Pavilion in Davos. They discussed the steps being taken by the Government of Andhra Pradesh to promote the IT sector and the availability of human resources here. After the meeting, CP Gurnani said that Chief Minister Jagan had decided to make Visakhapatnam a major technology hub. He said the CM had asked Tech Mahindra to invest in skills development here. Tech Mahindra Chairman said that they have decided to work with Andhra Varsity for this. Gurnani said he would work with Andhra University over the next three months to develop a specialized curriculum in high-end technology to enhance human capabilities while making Visakhapatnam a hub for artificial intelligence. 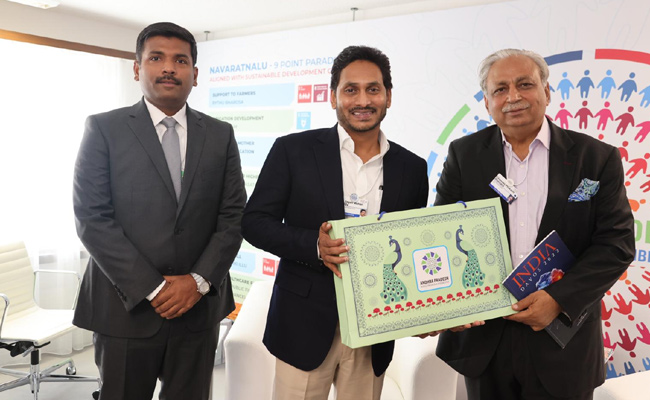 With more celebrities
The AP government is trying to secure large-scale investment through meetings in Davos. As part of this, the Chief Minister is meeting several dignitaries on the second day of the conference. Chief Minister Jagan will hold talks with Takeshi Hashimoto, CEO of Mitsui OSK Lines Limited, a leading Japanese transport company. Jagan will also meet Hero Motor Corporation Chairman MD Pawan Munjal. Finally, Chief Minister Jagan will hold talks with IBM Chairman and CEO Arvind Krishna. Likely to see even more celebrities.
Read: ‘Family Doctor’ for every family in AP – YS Jagan at the WEF Conference