The rings of Neptune

Astronomers have known for decades that the ice giant, which is 30 times farther from the Sun than Earth, has five rings. According to the European Space Agency (ESA), the new image shows these icy rings in more detail than any survey since Voyager 2 flew within a few thousand miles of Neptune in 1989.

Due to the planet’s position at the outermost end of the solar system, these rings are rarely seen, and Neptune itself is almost invisible to the naked eye. However, Neptune appears blue in visible-light images taken by Voyager 2 and the Hubble Space Telescope.

According to NASA, the color is caused by methane in the planet’s cloud atmosphere, which seeps deep into the planet and then melts into a super-hot soup of molten ice, ammonia and other compounds. JWST uses a special sensor that captures light in the near-infrared, so these methane clouds glow eerily with light reflected from the Sun, giving the planet a ghostly glow.

The deepest image of the universe

This is the deepest photo ever taken in space. The starlight seen in the photo took about 13.5 billion years. Years — or the age of most of the universe — to reach the James Webb Space Telescope, NASA wrote.

See also  Remarkable discovery from Hubble: Extraordinary motion in the rate of expansion of the universe 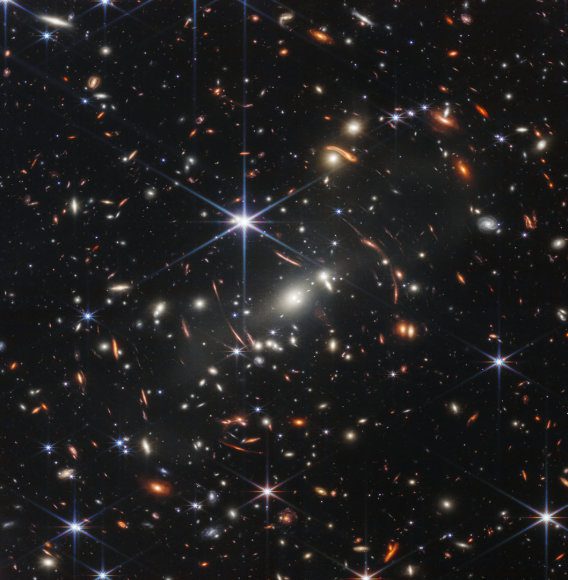 NASA Administrator Bill Nelson commented at a press conference about the patch of universe seen in the photo: “If you held a grain of sand at arm’s length with your fingertips, you would be part of the universe. See [nuotraukoje]”.

Read more about the first photo of JWST here.